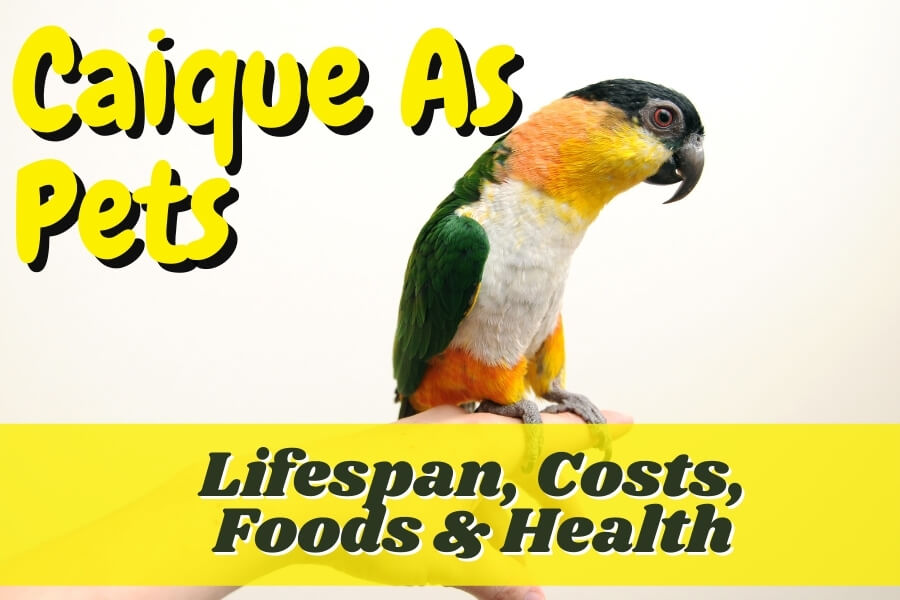 Are you a bird lover looking for an intelligent, energetic, mischievous, and beautiful bird to be a part of your family? If your answer is yes, then we have for you – the Caique species.

Caiques are famously referred to as clowns of the companion birds for quite a valid reason. Being recognized as the clown is indeed a fitting image because of their energetic and playful nature.

Only when you see an active caique will you actually learn how mischievous these medium-sized creatures are.

With that said, let’s dive into this guide and learn more about Caiques, their personality, and much more.

First and foremost, let’s start with the way you pronounce the name of these adorable creatures.

A Caique is pronounced as “kai-eke.” Trust me; you don’t want to go to a bird store and ask for “cakes!” You’ll most likely be guided to a bakery nearby!

That aside, Caiques come in two different species, namely:

Most bird lovers keep both species as pets. Apart from a couple of apparent contrast, the white-bellied and the black-headed parrot features an almost identical appearance.

Both species measure 9-inch to 10-inch long. In addition to that, the mixture of their color is yellow, green, white, and orange.

The white-bellied caique features a white belly, as the name suggests, with a mix of yellow and orange-colored heads and a pink-like beak. While, on the other hand, the black-headed parrots have black heads with black beaks. Also, as it happens, the latter species do feature white bellies as well.

Many new caique owners mention that this loyal bird is quite burly. Much to their surprise, they are heavier than expected, as no one would have guessed judging by their size.

In its natural habitat, Caiques originated from the regions of South America, the north-eastern part of the Amazon. Ecuador, Peru, Colombia, Suriname, Guyana, etc., are some ranges included. You will find these species in some regions of Venezuela and Brazil as well.

The hot swamp forests and marshland are where the caiques feel at home. Always in flocks, these parrots are pretty friendly by nature, and you’ll hardly ever see them without company.

What’s more, caiques are one among the many species that love to bathe. Hence, the name ‘caique’ is known as ‘aquatic bird,’ which is derived from an indigenous Brazilian language called Tupi.

How Long Do Caiques Live?

Normally, caiques in captivity have a lifespan of 25 to 30 years. However, it mostly depends on how well you take care of them. While in captivity, the caique lifespan is shorter in comparison to their natural way of living.

These creatures are the ideal companion for you as they are loyal and friendly, among other remarkable traits. All you need to do is make sure they stay healthy, give them the proper nutrition and be void of any health problems.

As long as you look into all these factors, I can assure you that your feathered buddy will offer you long-term companionship. It’s as simple as that!

How Much Does a Caique Cost?

The caique species as a companion are increasing in popularity among many bird-lovers. And pretty sure you’re one among the many! But of course, you need to get on with your research before you make a purchase. Well, worry not, we’ve got that covered for you as well.

Because caiques are not that commonly traded like other bird species, they are considered premium. Therefore, a white-bellied parrot can range between $750 and $2000.

Furthermore, the female caiques are more expensive as compared to the males. So, if you’re keeping a check on the budget, I highly recommend you to choose a male caique.

On the contrary, the starting price of the black-headed species is $800, which can range up to $1200. You can find them easily, unlike the white-bellied caique.

Overall, the caique price ranges between $750 to $2000. This, of course, depends on the parrot’s age, gender, location as well as the breeder selling it.

Having said that, there’s also the option to adopt. All you have to do is get in contact with a rescue organization or bird adoption center having caiques. There’s all there is to it!

Note: As mentioned, the caique is quite a unique species, so you may not find them in most pet stores. The best option is to look for a bird store or a breeder to get yourself a caique buddy.

A caique’s personality is the leading cause for its rapid climb in popularity, besides its prominent appearance. They are a great companion for humans and form a great bond with each other.

Caiques are attention-seekers. They love to dance, hop and enjoy showing off – the very reason why they are known as the ‘dancing parrot.’ They are also affectionate and like to play, and at times, they don’t mind spending some peace and quiet time with their humans.

With patience, you can even teach them tricks and plays as they are fast learners. One of which is them laying on your palm upside down.

That being said, this species does have its bad side too. While the caique makes an amazing pet, they’re not without flaws.

Every so often, caiques become cranky, stubborn and may start using their beak during an interaction. Nevertheless, none can deny the fact that despite their willfulness and nipping, they are still adorable. Just make sure to check on your feathered buddy in the presence of other birds in your home.

This is because caiques are known to be aggressive towards other birds. Therefore, it’s necessary to take proper care so that no harm is done to your other bird friends.

On a side note, to prevent them from nipping or biting you, use toys for substituting your fingers.

Your caique may still keep beaking at you instead of the toys. In that case, some disciplining is required. You need to put them in the cage and cover it. Do this for some minutes soon after their screams stop and uncover the cage only after your caique quiets down.

This way, you can mellow down their crankiness and teach them how to communicate with you better.

How Should I Care for My Caique?

First and foremost, a caique requires a large area despite its medium size. If restricted to a small enclosure, this highly active parrot will suffer and be in distress.

It’s always the best option to build an aviary spacious enough for your bird and with proper bar spacing. Keep in mind to include enough wooden perches so that your caique can hop around freely and also chew on them.

Note: Caiques are intelligent birds, so they will quickly figure out their cage’s weaknesses. Therefore, make sure to construct the enclosure with heavy-duty materials, like the ones built with stainless steel.

When it comes to their diet, caiques cannot survive alone on seeds because seeds are low on vitamins and nutrients. This species needs pelleted food of a high quality that is vitamins and mineral-rich. It also has to be enriched with protein, fats, and fiber.

Apart from pellets, your caique should be fed fresh leafy vegetables such as kale, swiss chard, watercress, etc., as well as fruits and grains.

Caiques love to play with chewable and destroyable toys, so you’ll need to replace them on a regular basis. Also, do keep them engaged. Otherwise, your caique will turn to wild screams and may start to feather pluck, which is another behavioral problem.

As I’ve mentioned earlier, a caique loves bathing, so offer them the chance frequently. This is another excellent way to bond with your companion.

Additionally, filing down its beak is another caring tip you need to take heed of. If it starts curving inwards, your caique won’t be able to eat properly. Therefore, in order to ensure the beak has its proper shape, give them wooden toys and cuttlebones, along with the wooden perches.

In case of an overgrown beak, I strongly recommend you to take them to a vet for trimming it and bring comfort to your pet.

Speech and Vocalizations of Caiques

While cockatoos are indeed far noisier than caiques nevertheless, these parrots are by no means silent. So, if you’re staying in an apartment building, chances are your neighbors will not be the biggest fans of the noise.

However, despite the fact that they’re loud, the caiques’ level of noise is moderate, unlike other species of parrots.

A caique can learn to cluck as well as whistle remarkably. Furthermore, this species is great at mimicking the sounds in its environment.

Once in a while, they tend to release extremely sharp and ear-piercing calls. So, be sure of their vocalizations and noise level prior to making a commitment to a caique.

A caique is a parrot species, and parrots are well-known for their talking skills. Be that as it may, caiques are not recognized for their ability to talk. Though they can be taught a couple of words and simple phrases, that’s the most they can do.

Unlike the larger parrot species, they don’t possess a distinct speaking voice and have trouble with pronunciation. Caiques take more time to learn the words. So, if you’re planning on training them, it’ll most likely take you six months to a whole year.

Caiques like chewing. Because by doing so, they show their affection to their human companion. Now while that may be so, an untrained bird may nip or beak at you by force for gauging the strength of its bite.

If this is your case, take my advice and get them various durable toys for them to chew on instead of you.

The caique species are healthy and do not have many health conditions. At the same time, certain symptoms of sickness need to be kept a watchful eye on.

Below are the symptoms that will be an indication in case your caique is injured or grows sick.

If you notice your caique developing any of these symptoms, it may indicate one among these common health problems:

In order to make sure your bird stays strong and in good health, a yearly visit to the vet is a must. The moment you notice any of the above symptoms or a behavioral change in your parrot, take them to your vet.

More so, taking them for check-ups on a regular basis, say once every six months, will allow you to easily pinpoint possible problems that will develop in your caique for a lifetime. For instance, this species can suffer from eye problems such as congenital glaucoma, which depends on the lineage.

Caiques can also contract polyomavirus through other contaminated birds, which can damage their kidney, heart, and liver. To prevent this, make sure your pet gets the polyomavirus vaccination with the booster yearly.

Is Caique the Right Pet for You?

Needless to say, a caique makes an excellent companion for bird owners with great experience, skilled at dealing with their territorial nature. However, if you are unable to train them appropriately, you will be faced with constant noises and their aggressive behavior.

Caiques do, nonetheless, make wonderful pets. With patience and enough time, you will be able to train this species well. They need sufficient care, activity, and attention, and in return, they offer you immense love and affection in their own adorable way.

You will know the moment your pet caique bonds with you, and once you do, your companionship will last a lifetime. This is as good as it gets! So, what are you waiting for? 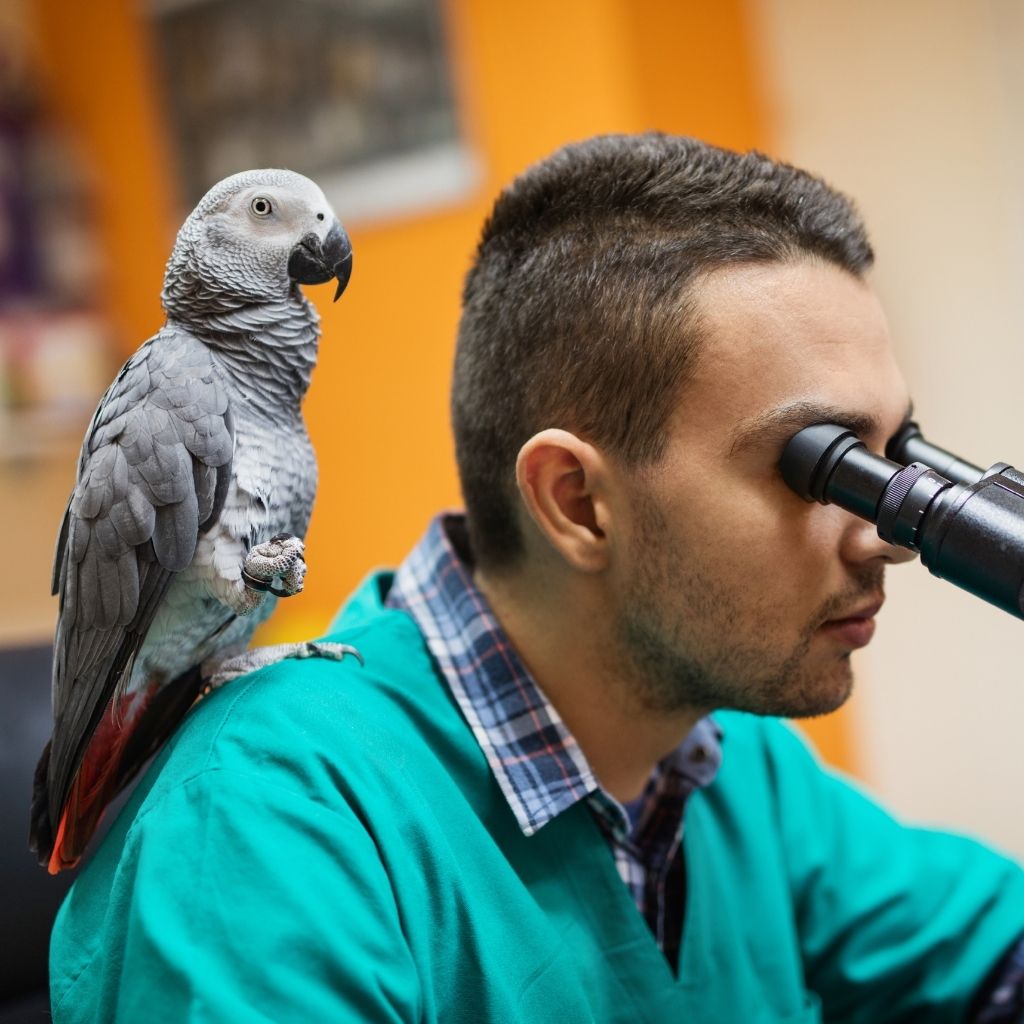