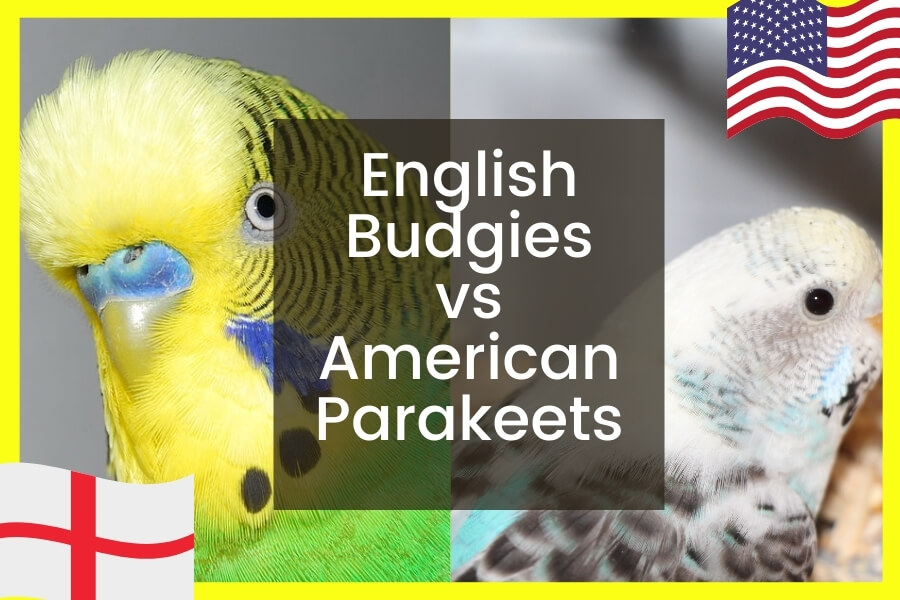 People often get confused between English budgies and American parakeets. Both of them indeed share a lot of similarities.

However, there are few key differences between the two types of parrots, and it is worth knowing the difference before deciding which kind to adopt.

This article will help you understand what to expect from English Budgies and American Budgies individually. It will be easy to tell if you have either one of these birds.

According to recent research, nearly 92% of the budgie owners can’t tell whether the budgie they have is an English Budgie or American Parakeet.

What? You heard me right. They literally are clueless on this point.

Though the American parakeets and English budgies originated in Australia, the former is more closely related to their wild cousin.

However, the English budgie may be kept as a pet, but they are primarily bred as show birds. Budgies have been selectively bred from the original wild budgies to increase their size and shape, similar to what humans have done with dogs for thousands of years.

Like how differently dogs look from one breed to another. Can you imagine they all originated from a couple of species of wild dogs?

Though no parrot is truly domesticated, the English budgie comes close.

How do you tell the difference between an American parakeet and an English budgie?

The English budgies and American Parakeets both have unique physical aspects which help us identify them.

Let’s understand this through the below points:

The two birds are identical in color and markings; however, the English budgie is much larger than the American parakeet.

The key to telling one from the other is to look at the size of their heads.

The English budgie has a bigger head and a longer body than the American budgie.

The good news is: you can instantly identify them if you put two of them side-by-side.

Having larger cheek patches and throat spots is another key aspect of telling English budgies from American parakeets.

English budgies tend to have larger patches on the cheek and more of them than American budgies. Same for the throat spots.

Check the picture below to know what I mean!

This is an image of an English budgie that I had a few years ago. As you can clearly tell, she had those big cheek patches and throat spots whereas you won’t find them on an American budgie.

Temperament — depending on how you tame them

Both birds are good companions, depending on how you tame them.

Even my completely untamed English breeding pairs will not bite me when I handle them. It seems that centuries of selective breeding for a calm personality have made this type of budgie typically more laid back.

English budgies are docile by nature, making them easier to train even for amateurs or even children.

Let’s see what American parakeets have to offer in this regard.

The common American parakeets are very active and not as easy to tame as an English Budgie. How come?

Well, thanks to their close bond with their wild relatives, the American parakeets are feistier than the English budgies, and they may have a bit of an attitude.

They are also a bit more demanding than English budgies.

Note that the American budgies may be likely to bite your fingers when you handle them. But no worries, even if it happens, the bite will be so mild that you may not even feel it.

The American parakeet, on the other hand, is very playful, and it loves to engage in long taming sessions!

Lifespan: English budgies live much longer. But why is that?

The English budgie lives about 7 to 8 years, while the American parakeet can live up to 14 years!

What causes such a drastic difference in lifespan?

Inbreeding! inbreeding is breeding birds that are close relatives of one another. This practice can cause great problems, one of which is shortening the lifespan.

Didn’t the breeders even know that?

Of course, they did know that. But they didn’t care!

They wanted to breed birds with the best traits possible, so they overdid it with inbreeding.

So which one is right for you?

If you want a budgie that’s easily tamed, then the English budgies will be a better choice for you because of their docile nature.

But if you prefer a bird with a more spirited personality, then the American parakeets will be right up your alley!

Interesting Fact: The English budgie is likely to spend most of its time on the floor. It will walk around your house instead of jumping from perch to perch. In contrast, American parakeets love to hang out in their cages or play in their swings.

English budgies VS American parakeets: Which One is More Expensive?

Budgies, in general, don’t cost much at all compared to other parrots, making them accessible to almost anyone. They are considered to be low-maintenance pets for most people.

In the United States, the average price for an American parakeet is about $15-$30.

However, a common English budgie can cost anywhere between $50 to $100 or more—especially if you want a “show quality” bird.

So, English budgies are more expensive than American parakeets. But why?

Because of their higher quality as show birds, many breeders are likely to charge that much just for an English budgie.

Indeed, when you compare these two parrots side by side, the difference in quality is huge! The feathers of the American parakeets are said to be dull, and they aren’t as colorful.

In contrast, the English budgies are dubbed with bright colors and stunning feathers that can’t be found on any other budgies.

They also have longer tails—which is the most important factor in a show bird!

Beyond the cost of the bird, there are monthly expenses for the food and accessories, anywhere from $10 to $25.

You would also expect to spend additional money on added perks, toys, or treats for your pet, which will bring the total expenses higher.

Vitamins, veterinarian visits, cage cleaning supplies, and other necessities will also add up.

Which One Is More Likely To Talk?

Both English budgies and American parakeets are among the best-talking birds, able to mimic hundreds of words and phrases.

Budgies are more likely to talk than American parakeets but vary individually.

Some of them can be very chatty, while others won’t talk much, but American parakeets may take to whistle more easily.

Teaching them to whistle first will help process faster. The key is to train them by getting them comfortable with the process of making noises. This method will help them learn to mimic sounds much faster.

As a matter of fact, an English budgie holds the record for most words learned by a bird with over 1,500 words.

The key to getting your bird to talk is through repetition.

Your bird will say the things that you say all the time. Repeating yourself a lot is the best way to get your bird to say what you want him to say.

Most people don’t need to make this much effort — a parakeet generally repeats what she hears a lot, usually her name and hello.

Can You Keep Both English Budgies and American Parakeets Together?

A typical question that many parrot lovers have asked, and the answer is “Yes.”

The English budgies and American parakeets can live together harmoniously.

In general, English budgies are peaceful by nature, so they get along well with other budgies or even parakeets.

You need to ensure that those individuals don’t have dominant traits and will bully or put down the other ones.

Introduce them to each other slowly; observe if they accept one another.

One way to go is to put their cages next to each other before finally putting them in the same cage.

However, each individual bird has its own personality. If things didn’t work out, don’t force it. Separate them to avoid any fights which could lead to injuries.

I have had my English and American in the same cage for four years without any problem.

Now you know the answers to all your questions about the English budgie VS American parakeet.

But they do have several differences that you should take into consideration when deciding which one is right for you.

Finally, the choice is yours!

I hope you will choose the one that fits into your lifestyle. Either way, enjoy your new pet bird and take good care of it!